Spotted lanternfly (Lycorma delicatula) is an invasive plant hopper insect native to China, India, and Vietnam. It was first discovered in the United States in Pennsylvania September 2014. Since that time the insect has spread into Connecticut, Delaware, Maryland, New Jersey, New York, Virginia, and West Virginia. In September 2020, two dead specimens were found in the towns of Milford and Norwood. They are thought to have been brought into Massachusetts on materials shipped from Pennsylvania counties currently under a spotted lanternfly quarantine.

Can they be found in Massachusetts?

Since that time Spotted lanternfly has been confirmed to be breeding in Massachusetts. As of January 20, 2022 SLF has been found in 21 cities and towns throughout Massachusetts. Most of the finds thus far have only been individual specimens and not believed to be established where found. However, SLF is established in Fitchburg and Shrewsbury. Due to the fast-spreading nature of this insect we expect that it is likely that we will need to manage for this pest in the near future. 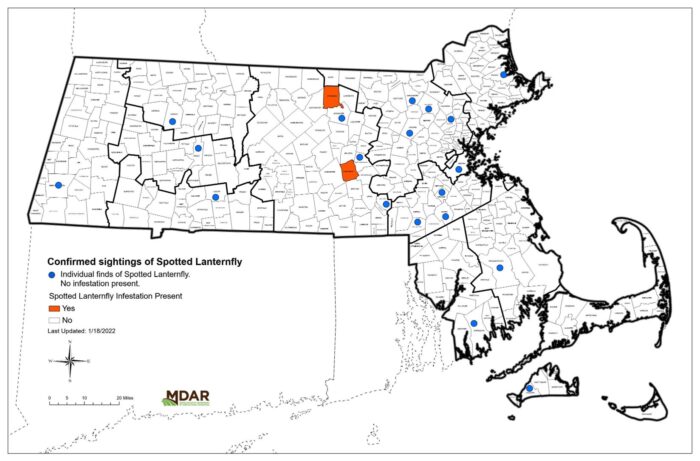 Host for the spotted lanternfly

The tree of heaven or Ailanthus altissima, an invasive tree species itself, seems to play an important role in the life cycle. Though not common in most managed landscapes, tree of heaven can be commonly found around urban and industrial areas, along major highways and roadways. Removing tree of heaven is part of the strategy for managing this insect. Tree of heaven is not the only host plant for spotted lanternfly. According to research (Barringer and Ciafre, 2020) spotted lanternfly has been reported feeding on over 103 species of plants. These are some of the most commonly fed on plants: 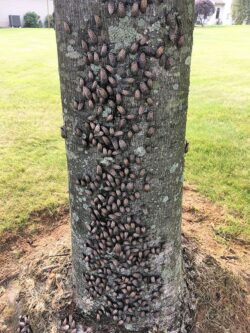 Both the adults and immature nymphs of this species damage host plants by feeding on sap from stems, leaves, and the trunks of these plants. Immature nymphs occur from about May to July starting out as all black with white spots. The Nymphs will develop more red coloration before developing complete wings in adulthood. Then the adults will feed through October or later. The females can begin laying their eggs as early as September. They will most often lay their eggs on or near the trees and plants they feed on, but may lay their eggs on any nearby surface. Though spotted lantern fly has not been found to fly very long distances they can fly. This combination of flying and laying their eggs on almost anything has contributed to their spread by moving of materials other than plants and can even hitchhike on vehicles.

Problems caused by the spotted lanternfly 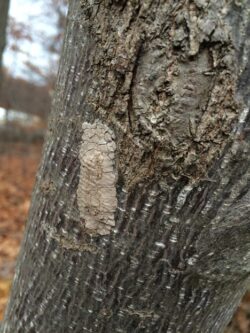 Spotted lanternfly tends to congregate in large numbers in individual plants. Trees may be found with sap weeping from the wounds caused by the insect’s feeding. The sugary secretions (excrement) created by this insect may coat the host plant, later leading to the growth of sooty mold like other piercing sucking insects. Insects such as wasps, hornets, bees, and ants may also be attracted to the sugary waste created by the lanternflies, or sap weeping from open wounds in the host plant. Although their feeding does not typically kill ornamental trees, they can cause stress and overall decline in health.

Research is underway to find a host specific predatory insect or insects that may be able to be released in the future to help regulate the population. This is a long-term solution, but will take many years of research before the possibility of release is considered. Until that time, traditional pest management strategies can be used to control individual populations. Systemic insecticides can be used to protect vulnerable plants in many cases as well as foliar trunk sprays directed at the adults and immature nymphs.