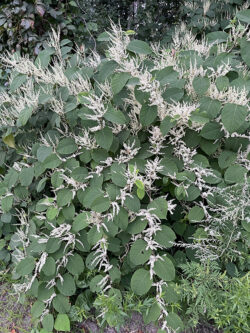 Japanese knotweed, (Fallopia japonica syn. Polygonum cuspidatum) is an invasive herbaceous perennial weed introduced from East Asia in the late 1800s as an ornamental and to stabilize streambanks. This has partially aided in dispersal of the plant along streams as seed and other plant parts can be carried downstream and establish new populations.

Where does it grow?

Although commonly found in wet habitats such as wetlands, and stream corridors, it will also occupy forest edges, drainage ditches and other dry habitats as well. Superficially resembling bamboo, its jointed, hollow stem has many red or purple nodes and the heart-shaped leaves are attached alternately zig-zagging along the stem. In late July and August, in the northeast, they will produce clusters of tiny white flowers. The flowers are highly attractive to bees and can be a nectar source for honey production. Japanese knotweed has also been used as a supplement in traditional herbal medicine. However, the negative effects and habitat disturbance far outweigh any positive benefits. 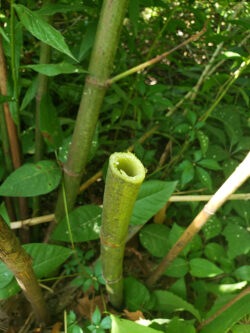 The key to Japanese knotweed’s success is its ability to spread vegetatively through its root system. Some populations will establish via seed, but the majority of the knotweed are spread horizontally via an extensive network of underground rhizomes. Rhizomes are not roots and are actually stems that grow under the ground and will develop new independent root systems. When left to themselves they will form dense thickets that will shade and crowd out other native plants. These rhizomes are prone to splitting when disturbed and each fragment is capable of forming a functional clone of the parent plant. Digging creates more disturbance and potentially distributes plant parts that may develop into new stands of knotweed. Stems that are cut, are capable of regrowing into new plants if in contact with moist soil.

There are a few treatment strategies that can be effective in managing Japanese knotweed. Foliar spraying can be effective using a nonselective herbicide like glyphosate. Glyphosate is effective, has low toxicity to nontarget organisms, has no soil activity, and is relatively inexpensive. ( Penn Sate extension). Because mature Japanese knotweed can grow up to 8-11 feet tall, it can be easier to treat if the knotweed is cut back in early summer and allowed to regrow for at least 8 weeks before treating. The regrowth will be significantly shorter making treatment safer and easier. Another approach is to cut individual stems and inject a small amount of glyphosate into the hollow stem. This method yields good results, but is limited by the number of stems that can be treated at one time because concentrated product is used rather than a dilute spray. This method also allows you to treat closer to desirable plants and other areas sensitive to overspray. Late season application of herbicide is especially effective because this is when the foliage is sending sugars produced through photosynthesis to the roots and rhizomes; systemic herbicides move through the plant with those sugars. 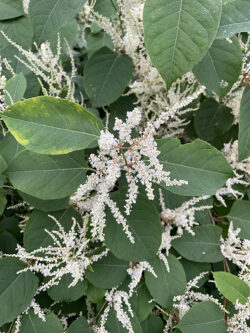 There are a couple of organic options involving heavy gauge black plastic to smother the plants, but the knotweed often will push through the plastic. Another method that can be used is to cut the Japanese knotweed down to the ground and lay ½ inch galvanized mesh over the area. As the knotweed tries to grow through the mesh, eventual the stem is girdled, dies and falls over. Over time this can starve the plant of resources as it continues to try to regrow weakening the population, but this could take several years to manage this way. There is also a relatively new biological control agent being evaluated that may reduce the vigor of Japanese knotweed. Though not likely to eliminate knotweed populations, if successful Japanese knotweed psyllid – Aphalara itadori may reduce the vigor enough to make other native plants more competitive in habitats being taken over.

If you have any questions or would like one of our team members to diagnose a problem in your landscape, give us a call at (781) 297-3674. For additional reading, check out our other blog articles by clicking here.