Lawns, trees and shrubs are living organisms and therefore face their own battles throughout the year. Now is the perfect time to recap many of the diseases, pests and environmental factors that took place in 2020. As professionals, we try our best to aid these living organisms to remain healthy or provide solutions as needed. Read through this year in review to recall some of those challenges:

Numbers of winter moth have been reduced in recent years with a combination of weather and introduced parasitic flies helping to keep the population from exploding. There will continue to be winter moth feeding on deciduous trees in the spring, but the overall damage particularly to large shade trees is reduced. Ornamental trees, fruit trees and other high value or stressed trees should be higher priority for treatment.

A large portion of the gypsy moth population has declined to only pockets of infestation particularly out along the RT495 corridor. Depending on weather conditions, it can take some years for the population to build back up to devastating levels. However they never go away completely and will continue to be around in relatively small numbers. Be on the look out for the tan egg masses on the underside of large branches and near the base of your trees.

Though this summer was actually quite dry with the extended drought spring was fairly wet and humidity was high much of the year. This led to another tough year for apple scab and other foliar diseases. We can’t control the weather, but keeping trees pruned so that the air can circulate in the canopy can help dry things out naturally and reduce disease. Good leaf cleanup and disposal of diseased leave can also help to limit infection in conjunction with spraying.

Like apple scab needle cast diseases, particularly on spruces, were also prevalent. Needle cast is a bit more complicated because infection and symptoms occur over multiple seasons rather than just one. This makes reinfection harder to control. Infection tends to be more prevalent in the lower canopy and will make its way up. Though most infection happens in the spring growth phase, some new information suggests a fall application can be beneficial as well. 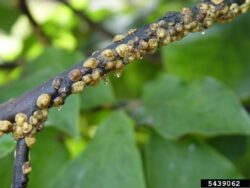 Magnolia scale has been prevalent for many years now and becomes most noticeable in the late summer when they are producing lots of honey dew. Unfortunately, there is little that can be done at that point to help and treatment needs to be made either earlier in the season or in the fall. The old adult scales can remain very noticeable on the branches and if not being treat on a regular basis they should be monitored

Hemlock woolly adelgid continues to be a serious pest of hemlocks, but elongate hemlock scale is probably more prevalent and harder to see without close inspection. The various options for treatment can work better on one that the other. We look at those differences to determine the best course of treatment.

As of October 30, 2020, the Massachusetts Department of Conservation and Recreation has confirmed a total of at least 161 communities in Massachusetts that have known populations of emerald ash borer, 62 of which have been found in 2020. There are many reasons that ash trees may die and it is common to see ash trees in poor condition. Removal may be the best course of action in many cases but healthy feature ash trees should be treated preventatively before they begin to decline to have a better chance of saving them. 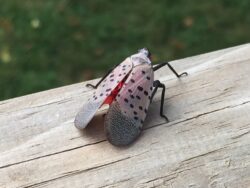 Spotted lantern fly is not known to be established in Massachusetts landscapes at this time. A few dead specimens were recovered in the towns of Milford and Norwood, and were brought into Massachusetts on materials shipped from Pennsylvania counties currently under a spotted lanternfly quarantine. Additionally, according to the September 25, 2020 press release, MDAR was recently notified that nursery stock with spotted lanternfly egg masses and adults may have been unintentionally imported and planted in several parts of Massachusetts.

Bagworms are most commonly found on arborvitae but can occur on other evergreen species and even deciduous plants as well. Bagworms historically have only been a problem coming north on nursery stock grown in the south and would rarely survive New England winters. As temperatures steadily rise, we are finding bagworms more likely to survive further north and expanding their range.

This year most of the state experienced drought and for a significant time severe drought in places. Plants will display a number of symptoms over time from drought. How quickly plants react is largely affected by size. Large trees do not necessarily show symptoms of drought stress in the current year as opposed to perennials that may wilt very quickly when too dry. It may take years to see adverse signs of stress in trees. Shrubs tend to vary in the middle of the scale depending on size and establishment. If possible, even established trees and shrubs should be watered in times of drought.

Mosquito populations were quite high despite the overly dry conditions through most of the year. The infrequent thunderstorms we would have were enough to create puddles and allow mosquitos to breed but not enough to really wet the soil to any depth where plants can benefit. Both organic and conventional options are available for treatments next season.

If you have any specific questions regarding these issues, please reach out to us at info@naturaltree.com or call  (781) 297-3674 we’d be happy to help!