A common question we get in the fall regarding hemlock and other evergreen trees is, “Why are my trees turning yellow?” In many cases, it is more than likely natural needle loss. Evergreen trees will naturally lose their older interior needles each year the same way a maple tree changes color and drop its leaves. The difference with hemlocks, for example, is they just don’t lose all their needles at once. Another reason there may be yellowing needles is damage from insect feeding. Let’s go into more detail about some common hemlock pests that could be causing harm to your trees. 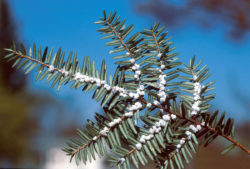 Do you know if you have hemlock woolly adelgid? How about the elongate hemlock scale? Both insects are exotic pests of hemlocks introduced from Asia and are spreading throughout New England. Hemlock woolly adelgid has been around since 1988 in Massachusetts and is well established. It is not known when the elongate hemlock scale first appeared in Massachusetts, but it was discovered in New York in 1908 and has become a major pest in the last 10 years. Females in both species do not fly and are moved around primarily by wind and birds. Unlike hemlock woolly adelgid, which can easily be seen because of the cottony masses they produce at the base of needles, the elongate scale is much more subtle. Elongate scales are only about 1/20th inch long, brownish tan in color and males may be more whitish.

Both insects damage hemlocks in much the same way. They have piercing-sucking mouthparts that tap into the tree’s sap, sucking the life out of the trees slowly overtime. These two pests can often be found together and can have 2 generations each year, so regular treatment is necessary to maintain populations at a minimum. There are topical and systemic options for treating these pests. The adelgid and scales do not move once settled on a branch or needles. For this reason, they can be treated very effectively with horticultural oil in most cases, which works merely by smothering the insects in place. 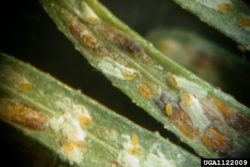 Horticultural oil can be made from petroleum, but we choose to utilize organic mineral oil for these applications. With heavy infestations of these insects or in places where trees are very large or spraying is not feasible because of drift concerns, trees can be treated with a systemic insecticide. A systemic insecticide can be applied to the lower portion of the trunk of the tree where it is absorbed and spread throughout the canopy. One application will last the entire season. In cases were elongate hemlocks scale is more prevalent this can be a good alternative or supplement to a spray program. Though systemic insecticides in the class of neonicotinoids can be harmful to bees, when applied to the trunk of the tree, exposure is limited.

Hemlocks are primarily pollinated by the wind, therefore pollinators would not be affected even if the insecticide did make it into the pollen. Because hemlock woolly adelgid and elongate hemlock scales stick themselves to the plant, they do not fall off after applications and old remnants can remain on the tree for years until they fall off naturally. Elongate hemlock scale outbreaks often intensify following infestations of hemlock woolly adelgid, drought, or other stresses. Therefore, maintaining trees in a healthy condition will encourage recovery. Hemlocks are very susceptible to drought because they have shallow root systems, so ornamental trees should be watered during dry periods.

If you have hemlock trees, you likely have one or both of these insects. With regular inspection and treatment, the hemlocks in your yard can be saved! As your plant healthcare experts, please call us today at (781) 297-3674 to answer any questions about hemlock pests or problems.

Lawns, trees and shrubs are living organisms and therefore face their own battles throughout the ...

How to Protect Plants Over the Winter

Have you ever noticed how rhododendron leaves curl themselves and droop in the winter? This ...